Fetvacı’s work focuses on the arts of the book in the Islamic world, as well as Ottoman, Mughal and Safavid art and architecture. 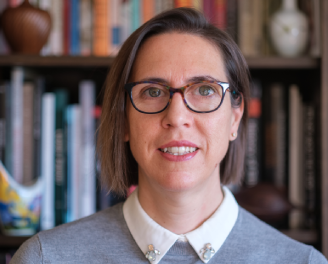 “The Islamic world includes a rich variety of historical, aesthetic, and cultural traditions which I examine in my teaching. One way of engaging with this variety is by examining cultural interactions among the various groups within the Islamic world, as well as their relationships with their neighbors in Europe and the Far East,” says Fetvacı. “By exploring the rich history of the Islamic world in my courses,  I hope to instill curiosity and excitement about Islamic art among new generations of Boston College students. Equally important, my research and publications will enhance the department's already impressive research profile.”

One cultural interaction that Fetvacı is researching at the moment is the creative exchange between the Ottomans and the Mughals, which she discovered while preparing her last book on an exquisite album made for Ahmed I. “I am exploring mostly the book arts, but of course there were other important media, such as textiles, which fed into a constant flow of goods across the Indian Ocean.”

Fetvacı’s love for art history happened by chance at RC during Lise 3. “At that time, a class needed at least six students in it, and five of my closest friends were asking Mrs. Atakan to teach them art history. They talked me into being the sixth. I enjoyed that class so much that I took more art history classes at Williams and eventually majored in it. So this all began with Nancy Atakan's engaging teaching and the inspiration she provided.”