Sabancı University awarded their first-ever honorary doctorate to industrialist Jan Nahum at a ceremony on October 26, 2020. Güler Sabancı, Board Chair of Sabancı Holding, recognized Nahum - a member of the Sabancı University Board of Trustees - for his contributions to education, industry and academia-industry cooperation, saying, “One of Jan Nahum's most important characteristics is that he can foster cooperation. With Jan Nahum now as a representative of both the business world and the academy we will continue to develop our work further.” 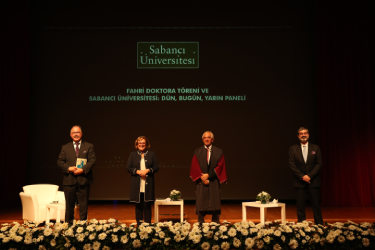 Nahum said, “It is a great honor that such a university should give me the title of first honorary doctor. I would like to thank everyone who has deemed me worthy of this.”

Speaking about his career Nahum stated, “I fought hard to make the Turkish automotive industry competitive with the world. Not renouncing my dreams, I worked hard for them, even ready to resign, if necessary, to realize them. I, too, have experienced failures, as well as success. If you want to avoid failure while on the road to success, inevitably you distance yourself from success. It is important not be afraid of failure and to learn from failure. It is necessary to make strong connections between the new and the old and the inexperienced and the experienced.”

Jan Nahum was also awarded an honorary doctorate in 2013 from Okan University for his contributions to the transportation sector.