“I am grateful to RC for showing how to seek wisdom and help all on your own.”

Nergis Yazgan worked at the forefront of the environmental movement as the director of both Doğal Hayatı Koruma Derneği and WWF (World Wide Fund for Nature) Türkiye for many years. 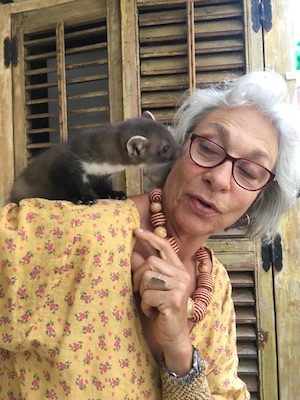 What is the story behind the founding of WWF in Turkey?

How and why I became obsessed with nature protection has its roots in three things: My family, where I lived, and ACG - today’s Robert College.

My father loved nature, but he was a relentless hunter, so ever since I was a toddler, I was outdoors, and I had an innate love for animals. From the age of 12, I was allowed to carry a loaded gun and shoot. Over time, I started questioning the killing part of our outings. I was intoxicated in nature, but depressed during hunting.

We lived in Bebek (a small town then) in a big garden between the Bosphorus in the front and the İpar Grove in the hinterland. This setup gave me all the unique tastes of nature – collecting mulberries and walnuts in the gardens, making wigwams and going swimming.

When I was accepted to ACG in 1958, I was ready to relish every bit of this extraordinary school –this beautiful woodland with all its diverse botanical treasures, birds and squirrels.

With the above in my “backpack”, I was ready to plunge into nature conservation, when I became President of DHKD (Doğal Hayatı Koruma Derneği; Wildlife Protection Association) in 1985. The reason Belkis Balpınar, then Founding President of DHKD, wanted to hand me the presidency of this fledgling society was that she knew I had a deep love for nature and could give the association a new life.

I did not even know the difference between a society (association) and a foundation or a board meeting and a trustee meeting. In fact, I had no clue what working as an NGO meant. I learned everything during the many years I worked as president and CEO for DHKD and later WWF.

Over the course of 1985-1998, DHKD merged with WWF. The modest association founded in 1975 mainly to save the bald ibis from extinction in the Birecik region now became the National Organization (NO) for Turkey within the big network of WWF International. The main reason for being invited on board was the extraordinary hard work and success DHKD had in saving the İztuzu Beach in Köyceğiz, Dalyan from becoming a huge tourism development, thus securing the breeding grounds for the loggerhead sea turtles (Caretta caretta) for the future.

What are the positive changes you observe in this field?

I am very saddened that along with species and habitats becoming vulnerable or extinct, we now have even more major planetary problems like climate change.

On the other hand, more and more people living in villages or townships are putting up a fight to protect their forests or to battle against big multinational mining companies.

How did your education help shape your future?

I am eternally grateful to Robert College for giving us an incredible education – in all directions education can take you and showing how to seek wisdom and help all on your own.