“We all have to face the sea and not turn our back to it. Sea is life, sea is bread, sea is tourism.”

A giant in the Turkish business world, Rahmi Koç is also a role model in philanthropy and social responsibility. DenizTemiz Derneği/TURMEPA is an NGO he founded which continues to be at the forefront for the fight for clean bodies of water. 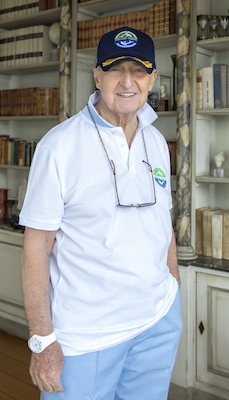 How did you create DenizTemiz?

In 1992, I became the president of the Turkish-Greek Business Council to facilitate economic cooperation between Turkey and Greece. My Greek counterpart was not an active businessman. Though I proposed many projects, I couldn’t get them off the ground. At a meeting I was approached by Mr. George Livanos, the biggest Greek shipping magnate at the time. He said “I founded HELMEPA (The Hellenic Marine Environment Protection Association) in 1982. You should start TURMEPA (Turkish Marine Environment Protection Association), and let’s cooperate.” When I got back to Istanbul, I brought together 80 of my friends, all devoted to the sea. They agreed to be founding members. We established DenizTemiz on April 8, 1994.

Where have you made the most impact?

Our main objective was to keep our seas clean, our lakes uncontaminated, and to take care of our rivers. Soon we realized that the subject was vast, education was needed, and discipline around this issue had to start from an early age. Twenty-seven years ago no one really cared about the environment. Public awareness was low. We started by educating primary school teachers; then we moved onto students.

Both our studies and the work of the International Maritime Organization showed that water transport contributed to sea contamination only by 20%. The real culprits were household waste and untreated industrial and agricultural waste. That is why we later moved our focus there.

How are you educating youth and the general public?

We produced countless films, posters, organized conferences. We contacted municipalities, restaurants, hotels and many other organizations. Over time we realized the scale of the problem. No one NGO can solve this problem alone.

We started collecting waste with our boats in some regions. Many of our friends sponsored our efforts. We collected waste on the coasts with the public. Some artists even created works of art from this waste!

How has DenizTemiz evolved over the years?

At first the attitude of many towards DenizTemiz was “so what?” Our second president Eşref Cerrahoğlu built more awareness around these problems and especially gave momentum to education. Our third president Tezcan Yaramancı institutionalized our NGO, something we vastly needed. Our current president got more people to adopt the idea that our seas, lakes, and rivers need to be kept clean. Our governments and bureaucrats realized the severity of the situation, appreciated our efforts and helped us.

I remember a story: Forty years ago, my friend Ayşegül Nadir saw that trash was being thrown in the sea and that the municipality was not collecting trash. Some of us got together and hired a truck to collect the trash. We thought the truck was taking the trash to the waste area. We soon realized that the driver was collecting the trash, passing our neighborhood and just throwing the trash in the sea further down the coast at Üsküdar! It took us 40 years to transform that mentality.

We all have to face the sea and not turn our back to it. Sea is life, sea is bread, sea is tourism.