The merger of Robert Academy and the American College for Girls also so the merging of the two student papers, when the Bosphorus and the Campus Chronicle became the Bosphorus Chronicle. Through interviews and articles, the editors and writers of this new publication captured a snapshot of views about the merger from students and teachers alike. Here is a sampling: 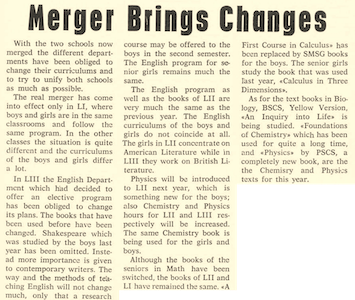 With the two schools now merged the different departments have been obliged to change their curriculums and to try to unify both schools as much as possible. The real merger has come into effect only in LI, where boys and girls are in the same classrooms and follow the same program. In the other classes the situation is quite different and the curriculums of the boys and girls differ a lot. In LIII the English Department which had decided to offer an elective program has been obliged to change its plans. The books that have been used before have been changed. Shakespeare which was studied by the boys last year has been omitted. Instead more importance is given to contemporary writers. The way and the methods of teaching English will not change much, only that a research course may be offered to the boys in the second semester. The English program for senior girls remains much the same.

The English program as well as the books of LII are very much the same as the previous year. The English curriculums of the boys and girls do not coincide at all. The girls in LII concentrate on American Literature while in LIII they work on British Literature.

Physics will be introduced to LII next year, which is something new for the boys; also Chemistry and Physics hours for LII and LIII respectively will be increased. The same Chemistry book is being used for the girls and boys.

Although the books of the seniors in Math have been switched, the books of LII and LI have remained the same. «A First Course in Calculus» has been replaced by SMSG books for the boys. The senior girls study the book that was used last year, «Calculus in Three Dimensions».

As for the text books in Biology, BSCS, Yellow Version, «An Inquiry into Life» is being studied. «Foundations of Chemistry» which has been used for quite a long time, and «Physics» by PSCS, a completely new book, are the the Chemistry and Physics texts for this year.

Although previous years’ RA and ACG have come together to form a new, coeducational school, having boys and girls on the same campus has, by no means, produced coeducation in the full sense of the word. Only in Lise I do boys and girls have merged classes. In Lise II and Lise III the view is completely different. Most courses are offered separately to boys and girls. In Lise II only Arts, Chemistry, German, French and Military Science classes are coeducational. For the Lise III students Organic Chemistry, French, German, Drama and Military Science are the only courses in which boys and girls can be seen in the same class.

What if two societies both over a century old are compelled to coalesce in the most uncomfortable conditions? What If two distinct groups with certain socially - patterned habits formed over decades are coerced into being a body the habits of which can be patterned over the next two years under the present circumstances? The letter in the «SOUND and FURY» column in this issue is one of the outcomes of this unpleasant situation. The general position of seniors and to a lesser extent of LIIs is the source of trouble.

Few things may be bright at the beginning but frankly the merger has not been accomplished in the best possible way. A senior girl has 34 sessions and a senior boy has 32 sessions a week and they are lucky if they have a merged class in the electives. Similarly, the unification of the curriculums at which committees labored so much last year was not of great significance since it meant studying the same texts in two separate schools. Mixed classes of boys and girls could have been established in Turkish Cultural Studies, Math and Science courses. They were not due to the heavy program of senior and LII girls, we were told. Only the English Department is justified in this respect: It would be ridiculous to merge classes with a great difference of experience with the English language. It is furthermore justifiable to preserve systems which do work better on their own than in mixture.

In a way, it was the easier course, the shortcut that was taken: bringing up a class merged from the LI year on. In two years time girls will not be so alienated from their boy classmates and vice-versa. In two years time the looks will be more friendly, faces more familiar. In a way the LII’s, and most of all, the seniors are committing, or are being forced to commit themselves to the future of a school-which has serious financial problems concerning its survival. But there lies the challenge... The challenge of a smile instead of an expressionless gaze, of ambition and cooperation instead of indifference, of doing more than what’s expected, of sacrificing willingly instead of being compelled to it.