For our Lise 9 student Şems Polat “Math, fundamentally, is an endless world of discovery and understanding relations.” He spends a considerable amount of time enjoying mathematical theorems and proofs. He won the silver medal in the Final Mathematical Cup. We asked him about how he trains, his plans and why he enjoys math so much. 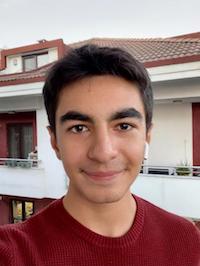 Please let us know about the details of your success… Which tournament was it? What was your rank?

How did you prepare for this tournament?

To be quite honest, I have not made any specific preparation regarding the FMC; however, as the Istanbul Math Olympiad team we are constantly in the preparation process with the lessons and practices, that might be considered as a preparation for this tournament.

My interest in mathematics have developed since the primary school as my father’s student, my mentor Cihan Pehlivan, and I have started studying for math in terms of an area of interest. Later on, as I have fortunately passed TÜBİTAK’s first stage Olympiad exam, I became more immersed with the Olympiads aspect of math and that I am currently studying in regard to that.

What do you like about math? Why did you want to get involved in Math so much?

It might be an abstract answer; however, I will try to solidify it as much as I can. Math, fundamentally, is an endless world of discovery and understanding relations. Most people interpret math as what is being taught in high school curricula; however, math is much more than that, as I have stated. The theorems and the proofs have no room for ambiguity and that is one of the reasons I like math as such a lofty aim and principle cannot be seen in any other area. In addition, apart from pure mathematics, it is an essential tool to understand the world and apply to other areas. When we examine the Nobel Prize winners in economics, each and every laureate is a mathematician. Even though I am interested in this area, I definitely do not want to be an academician and teach lectures later on in the future, but rather have the know-how and apply it to somewhere else such as the business world. Therefore, to come back to the point, I believe that mathematics has so many aspects that make it unique, from promoting critical thinking to reviving imagination, and that it is what makes difference in the world.

What advantages does it have to spend so much time practicing your math skills?

First of all, I would like to touch upon the fact that we are all practicing math skills through our school curricula but the focuses are much different. In olympiads or in the actual world of math, things go with proofs. Every statement requires a logical reasoning behind it which is also known as proofs; therefore, it definitely enhances the critical thinking abilities and similar soft skills. Apart from improving these soft skills, it also benefits you academically as the people with special interest in math are familiar with what is going on in the school’s math classes. The last but not least, in social terms, you obtain a great network and be a part of a community by means of math.

How, where and with whom do you practice your math skills?

These days, as I am a part of the Istanbul Math Olympiad Team, we have ongoing studies through there with my fellow friends. In addition, I am also in contact with very experienced and distinguished professors and teachers Refail Alizade and Yunus Al.

What will your next step be? What do you plan to do in the coming months in this area?

As it is for everyone who is interested in olympiads, my primary goal in these terms is to pass the Stage-1, Stage-2 and Team Selection exams of TÜBİTAK’s High School Math Olympiads. If everything goes well, I will hopefully be participating in the International Mathematics Olympiads (IMO), which is basically the upmost level of olympiads. Therefore, I am currently targeting my studies towards that major goal for mathematics.

In addition, I am also interested in spreading this culture among my network and me and my friends are currently proceeding with establishing a Mathematics Initiative in RC, in which anyone who has a slight interest in math could join and be a part of the community. Our primary goal for this initiative is to create a diverse community of people from the ones with slight interest to the ones with deep knowledge about math. Therefore, I would also strongly urge everyone, who are interested in or curious about math, to join this initiative next year.